This is a comparative view of top level findings developed using the location specific reports of Gwalior, Datia and Bhind available here along with 6 other districts in Madhya Pradesh (MP). 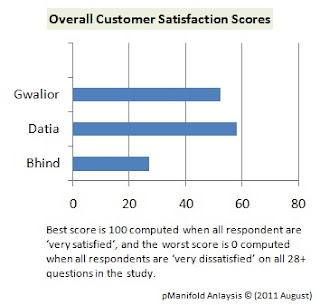 In the overall scheme of things,
Specifically in Datia, the increased score can be attributed to the respondents in the Commercial category who indicated satisfaction on most major factors under consideration especially their comfort with the current Pricing available to them and also their satisfaction with the Power Quality and Reliability.


Satisfaction of customers is also relative and consistent to the level of customer’s expectations in different regions. 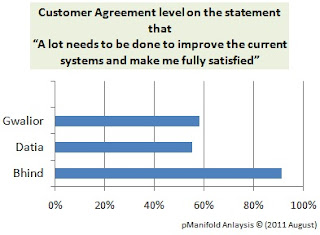 
Regions where customer’s believed more needs to be done to make them satisfied scored low on customer satisfaction.

Mixed reactions towards privatization of power distribution through franchisee model in Gwalior, Datia and Bhind 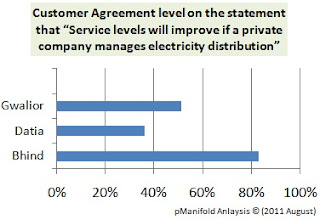 Over 70% of respondents from Commercial Category in both Datia & Gwalior disagreed that privatization would help improve service levels.

Over 80% of respondents in Bhind, both in Residential and Commercial categories, agreed that Privatization will help improve the current situation.