As the operator tries rolling out the services, the foremost task at-hand is creating the base-line for the utility. This, typically, is collated using a consumer survey called consumer indexing (CI). The operator main aim is to collect the information required for consumer demography and demand estimation.

The figure below shows the variety of data the consumer indexing, if designed properly, can yield:


Here's the catch though.

Since the consumer indexing process is an extensive full-city activity, our observation has been that it becomes extremely important for the operator to monitor the survey process continuously and ensure data accuracy.

Some of the Critical Factors for Success (CFS) for successful consumer indexing survey are listed below:


The data collected through CI process forms the base-line for the operator to put its plans (CapEx, OpEx, Revenue Planning) in place. Therefore, we believe, the onus of successful execution of the CI process is as much on the operator as it is for the survey vendor.
Posted by Anonymous at 7:25 PM No comments:

Bihar State Power (Holding) Company Limited (BSPHCL) has given minimum benchmark input price curve for all the regions, mandating bidders to bid higher than given price curve for all 15 years. The bidders in pre-bid meeting requested to lower or removed the rates, as current rates to allow them  innovating on financial structuring.

See below table with useful bid analytics (click on the image to see enlarged view): 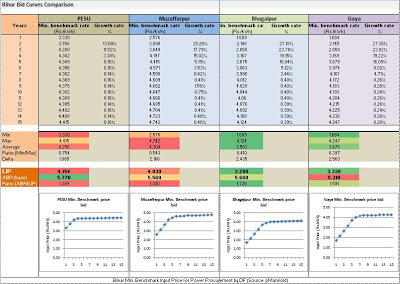 Some top level observations are:

Posted by: Kunjan Bagdia @ pManifold
Posted by Kunjan at 2:08 PM No comments:

This is the third attempt by BSEB to privatize the power distribution in its areas of Patna, Muzaffarpur, Bhagalpur & Gaya. Earlier in 2009, Glodyne Power Limited and CESC were the highest bidder and second highest bidders respectively. Later, CESC became highest bidder as Glodyne was held ineligible for participating in the bid after its partner stepped out of the consortium. In June 2011, BSEB cancelled CESC's bid, saying that it would lose heavily if it awards bid to CESC as the tender was floated in 2009 on the basis of tariff rate of 2007-08. In second attempt, only Essar Power submitted and others refrained from submitting bids due to certain issues on Minimum Benchmarking Price, but as Essar has not submitted formal acceptance within timescale, LOA was cancelled.


Muzaffarpur located at  26°07′N 85°24′E. The district occupies an area of 3173 km. Muzaffarpur lies between the Burhi Gandak River and Furdoo nallah. Muzaffarpur is one of the many gateways to Nepal.


Gaya is located at 24.78°N 85.0°E. Gaya is the second largest city of Bihar. Gaya is 100 kilometers south of Patna, the capital city of Bihar. Situated on the banks of Phalgu. It is surrounded by small rocky hills by three sides and the river flowing on the fourth (eastern) side.

Read more »
Posted by Anonymous at 3:29 PM No comments:

Apart from technical & financial parameters it is important for the bidders to evaluate the local intelligence for its operation & ease of setting up a business. pManifold has developed a process to research on the local intelligence through its network & secondary research to provide bidders with glimpse of the region on Demographics - Social & Economical, Political stability & activities & enable them making right decisions. Below is the quick snapshot from the local intelligence report from pManifold on Ease of Operationalizing Distribution Franchisee.

Patna is the capital city of Bihar state. It is located on the south bank of the Ganges River. The city is approximately 35 km long and 16 km to 18 km wide. The table below shows the quick facts about the region

Read more »
Posted by Anonymous at 2:25 PM No comments:

Bihar State Electricity Board (BSEB), after a long gap of nearly 2 years has come back, issuing revised Request for Proposal (RFP) for appointment of Distribution Franchisee for following areas/regions:

At last, BSEB got a final go ahead from the High Court to re-initiate its privatization initiative for Power supply, which went into long litigation detour with earlier entrusted Essar Power group. Having not received formal acceptance from Essar to its issued LOI in-time, BSEB has cancelled the bid, and issued fresh tender on Oct 22, 2012. 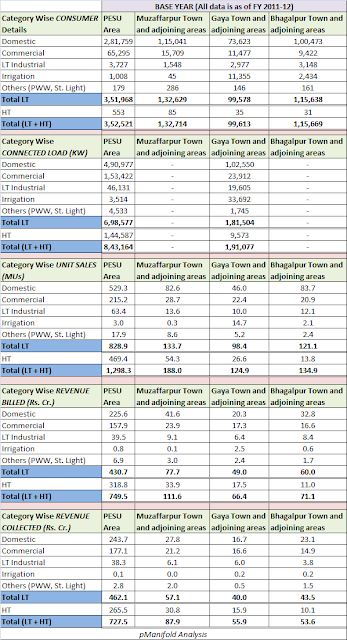 Other important parameters like Losses, Average Billing, Collection Efficiency are shown below. Few excerpts from the same are as follows:

Question 1: What are the Key Issues with our Discoms?

The WTP can be estimated using three different ways:
The first two approaches are based on observations of behavior and are called Revealed Preference Techniques. The third technique is based upon Stated Preferences and includes Contingent Valuation Method.

Contingent Valuation Methodology (CVM) creates a hypothetical market scenario and tries to obtain the value for particular goods, contingent to the scenario. The economic concept that the CV Surveys are trying to capture is the maximum amount that the individual would be willing to pay for certain goods/services.

The most important part of the CV Survey is to simulate a realistic contingent valuation scenario, which has accurately priced options that reflect the levels of prices the goods/service provider will have to charge.

The advantages and disadvantages of the CVM are presented below:


The CVM has proven to be the most popular of available methods for monetary valuation of environment.[1]

The application of Willingness-to-Pay Survey for a utility roll-out is depicted in the following figure.

The chart shows how the study integrates with the other functions of the utility and interacts with them to create an eco-system based on optimum approximations.

Biases
When a respondent does not answer a survey question truthfully, it is said to introduce a bias into the survey that undermines the validity of the survey. Therefore, the basic design consideration of the CV Survey is to avoid the many biases that might occur.

The different types of biases and the ways to avoid the biases in your CVM study are shown in the table below. These biases also need to be controlled during the interview conducted for the CVM Study.

Best practices for Designing WTP Survey
1.     ·  Survey Design should involve easily understood and pre-tested language, taking feedback from all focus group ·   Data Collection should be planned with appropriate attention to sample size, collection methods, sample representation of general population, and randomized selection ·     Correct statistical tests need to be applied for accurate interpretation of the results ·  Regression results for CVM bids should be conducted for validating the data ·  Question Design and interview process should be developed to reduce the bias introduced in the survey

For a case study on WTP for Water, visit our blog here.

Posted by Anonymous at 8:53 AM No comments:

pManifold's DF Attractiveness Matrix, provides a quick comparative study on key decision parameters for Bihar 4 DFs with reference to other states DFs like for Nagpur, Agra, Gwalior and Jamshedpur. (click on the image to see enlarged view)

Some of the key excerpts are highlighted below:
Clearly, across all regions, PESU area will likely attract more bidders because of its volume. The other 3 regions will attract small and new players to develop their base in fast emerging DF landscape in India. The baseline shared in RFP is still not very strong, and will attract many questions during the pre-bid meeting, that is planned for 16th Nov, 2012. Emerging Bihar calls again and this time for success of its first DF model, which will hopefully see increased participation.

Posted by: Kunjan Bagdia @ pManifold
Posted by Kunjan at 6:55 PM No comments:

Part 2 of 2: Interview at Reuters on future of Power Distribution Franchisee model in India

This is sequel to "Part 1 of 2: Interview at Reuters on future of Power Distribution Franchisee model in India".


Question: WHY BIDDING PROCESS TAKES SO LONG AND WHY DOES IT ATTRACT SO FEW BIDDERS? WHAT IS FURTHER NEEDED TO STRENGTHEN DF MODEL?
pManifold: Some suggestions on the same are as follows:

Question: WHAT ARE OTHER FRANCHISE MODELS IN INDIA AND HOW SUCCESSFUL THEY ARE?
pManifold:

Posted by: Kunjan Bagdia @ pManifold
Posted by Kunjan at 3:23 PM No comments: