'SMART Wireless Limited' is on a roll with its third successive bid win at Madhya Pradesh's Sagar city in Power Distribution Franchisee. The company's winning bid quote of Levelized Input Rate (LIP) was Rs. 3.726/unit. Compared to Gwalior and Ujjain, there were less number of participating companies in Sagar bids, totaling 6, out of which ACME disqualified due to some reason, against 9 in Gwalior and 10 in Ujjain      (see list of Technically qualified bidders for Sagar).

Now, with the completion of Financial bid for all the three cities (Gwalior, Ujjain and Sagar), we look forward to see 'SMART Wireless Limited' taking over and managing distribution of electricity in those locations very soon to augment and catalyze the Distribution Franchisee model.

pManifold's recent "Market Research Report on Input based Power Distribution Franchisee in India" is now available. The report is updated for 2012Q1. The report covers upcoming market opportunities in Distribution Franchisee, Competitive Landscape Assessment of existing operators, detailed previous bid analytics including recent MP bids, financial numbers and its sensitivity to different parameters, etc. For more details, see Table of Contents. You can place your order with us at kunjan.bagdia@pmanifold.com.
Posted by Kunjan at 7:38 PM No comments:

Some brief observations from the price bid are:

About Smart Wireless Ltd.
The Smart Wireless Ltd. company is into generate new technologies in the messaging space and facilitate technology and process driven companies using cost effective data transfer solutions such as SMS. The Wire segment of the Essel group is currently one of the largest cable distribution system in India, with presence in 54 cities. It will be interesting to see their existing B2C reach also to the power distribution business. Overall the Essel group has wide portfolio in Infrastructure (roads, SEZ, power plants etc.), Media (ZEE, DNA being their leading brands), Technology, Education, and other diversified businesses.

Upcoming Results
Sagar city results are likely to be announced in next week on 12th March. With 'SMART Wireless' as the winner of 2 cities already, it is to be seen if they would do a hat-trick. It is also a question for MP policy makers if they would allow one company to do all the 3 DFs at such aggressive rates and risk non-performance. 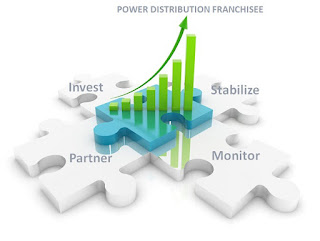 The licensee (state utility) appoints a private company on the basis of rationale bidding for distribution of electricity in a specified area for specified years of contract. This Distribution Franchisee model stands midway between licensee and full PPP model and is considered as one of the major energy reforms in power distribution sector that has the potential to turnaround the sector and take electricity to rural areas as well. 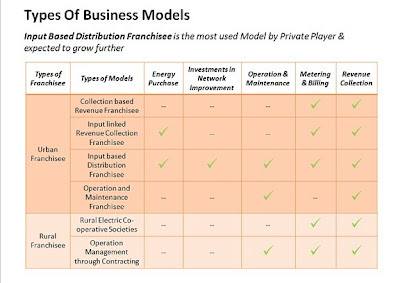 Email ThisBlogThis!Share to TwitterShare to FacebookShare to Pinterest
in CleanTech, Distribution Franchisee, Energy

This rate quoted for Gwalior city is highest compared with all previous DF bids.

Some key observations from the price bid are:
Read more »
Posted by Kunjan at 3:31 PM No comments: