It was the summer of 2011 when both GTL (April 2011) and Spanco (May 2011) took up the distribution franchisee operations in Aurangabad and Nagpur respectively. Now in the summer of 2012, they have completed 1 year in operations.

Spanco's first year of operations in Nagpur can be termed as good as they have been able to acquire good leadership talent, arrange private equity investment (Rs. 80 Cr. from Bessemer), perform roll-out of network up-gradations (which were a little bit forced due to the storm of May 17, 2011) and establish better ways of understanding and communicating with customers and local stakeholders (including a new website, 24x7 call center, online payment facility, DF and non DF area wide independent customer surveys (twice), monsoon campaigns, door-step new connection campaign and more e.g. instituting a whitepaper promoting their newly adopted city of Nagpur as an IT/BPO destination). Although teething troubles are galore and would take a while to reach smooth operations, things seem under control on major fronts including PR, Opinion leaders and customer. The major concern still is the non-payment of over Rs. 200 Cr. to the licensee which is scheduled for hearing by MERC i.e. May 3, 2012. Spanco has customer base of approx. 4 lacs and is divided into operations into 3 Divisions, 6 Zones, 46+ payment centers and 6 customer facilitation centers.

This is how Spanco, preferred to communicate its one year of operations at Nagpur - through advertisement in a local daily. 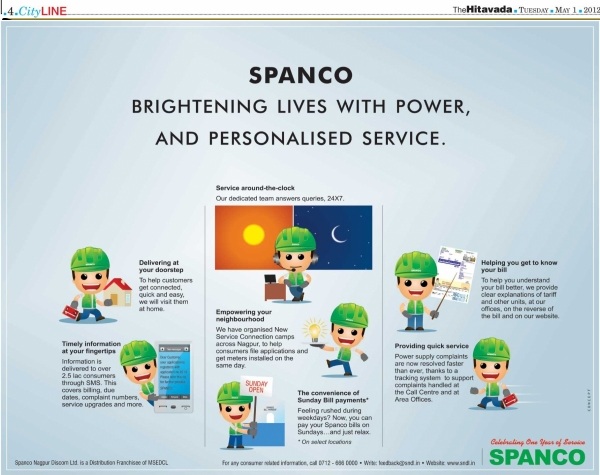 GTL @ Aurangabad, has similar ups and downs. The company has customer base of approx 2.5 lacs and operationally divided into 2 Divisions, 8 zones, 33+ payment centers and 2 Customer Facilitation Centers. The company has taken several initiatives - network upgradation, Electronic meter replacement with current approx. 85% connections (from last 65%), has website, launched a 24x7 call center, established online payment facility and monitored customer feedback ad-hocly. GTL also had been unable to make complete payment to MSEDCL and has due amount around Rs. 200 crore. Their parent company's struggle with downturn in the Telecom Tower business, and ongoing corporate debt restructuring could potentially shadow its DF operations.


As any emerging business model, there is continuing learning for Power Distribution Franchisee players. One major challenge that still remains unresolved is about funding (both debt and equity) of the Distribution Franchisees. There are rising PE players who are getting interested in this segment, but banks still needs to be convinced on the DF model's viability. There is need to educate investors on DF model and its distinction from DISCOMs, that are struggling with debt trap. Hopefully this year will see more clarity on Distribution Franchisee model with emerging new RFPs.

At pManifold, we look forward to raise an association of all operating DFs, to be able to share best practices and also rightly advocate real issues with stakeholders to support scale-up of DF model and reforms. One of best practices for DF to follow in 'Customer Engagement' is already live, with pManifold aspiring to create an unique customer rating for Utilities pan India.

Post by: Faiz and Rahul @ pManifold
Posted by Faiz Wahid at 3:05 PM