While open access as a phenomenon comes as a relief to many in the power market and
particularly Big Industrial Consumers who have been making a fortune, because of this
mechanism which has been facilitating them in getting access to the abysmally low prices
prevailing in the open market over the last 2-3 years. This has also helped them gain access
to much cheaper alternate source of power which otherwise used to come from Diesel
Generators at an average rate of Rs. 16-20/Unit.

Barring a few states, most states across the country have been finding out ways and means
to curb outgo of these Big & Paying consumers to avoid revenue loss on one end and to
avoid embarrassment of higher T&D loss on the other, which comes parallel to outgo of big
consumers who normally account for much lesser T&D loss and virtually no commercial
loss.

In case of Franchisees, who generally serve a relatively smaller load and have strict targets
to meet both in terms of loss reduction and improvement of service quality, the consumers
mix plays an extremely important factor. Any sudden change in the consumer mix may lead
to a phenomenal jump in the T&D loss levels and may make the loss reduction trajectory
unviable. Moreover the loss of consumers itself is a business loss as it brings down the Top -line and also the Bottom-line.  An illustration below demonstrates the same: 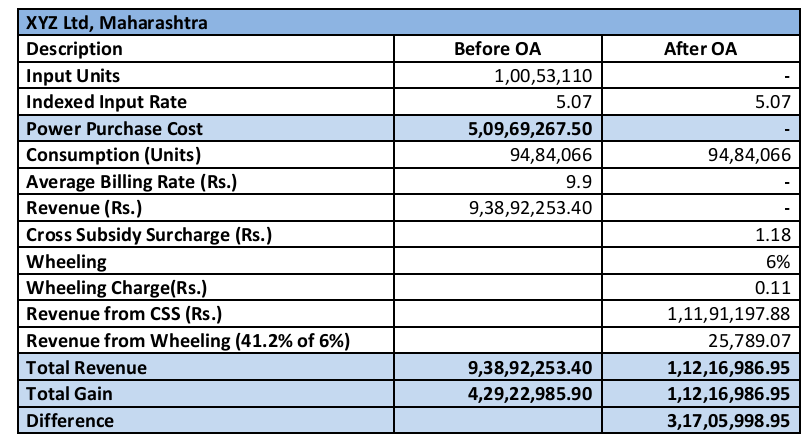 We also need to note that most areas taken over by Franchisees in the recent past have
been relatively urban pockets with a reasonable mix of Industrial, Commercial and Domestic
consumers. This is because of the fact that they are there to do business and  create value
for their shareholders. It is a long term play and the profit starts coming only after a few
years and only after a lot has gone in to get the systems in place. If that’s not taken care of,
sooner or later the franchises would find the proposition unviable and leave.

To demonstrate the possible scenario that a Franchisee may have to face in case its HT
consumers move out, we have considered a sample scenario where a franchisee area of 100
MUs billed energy has been considered. Out of this 40 MUs has been considered to be
consumed by those HT consumers that have the size and load to go for open access. These
consumers have been assumed to have a loss percentage of 4%. All other consumers have
been grouped into LT with an average loss level of 30% and total billed energy of 60 MU’s.

The above case study clearly demonstrates how the situation may go from bad to worse just
because of movement of HT consumers on account of open access. Clear Indication of the
loss that may be felt on the Top-line and Bottom-line of the Franchisee.

To ensure that the Franchisees have some tools in hand to plan and deal with this scenario,
which would sooner or later become a reality in most states, includes:
Note: This paper aims at assessing the impact of Consumer Open Access on Franchisee
operations and how the same can be factored in as a reality to ensure success of franchisee
business which holds key to Discom’s efficiency improvement efforts. We request you  to
please share your feedback's/suggestions to help us strengthen this assessment and prepare
a feasible win-win solution for all the involved parties.

About the author: The author for the above Whitepaper is Mr. Naveen Singh, Senior Manager, India Electron Exchange Ltd. He can be reached at naveen@indiaelectron.com for more information or for any inputs. The above shared are author's personal views and not to be associated with any of their company's association.
Posted by Kunjan at 12:52 PM